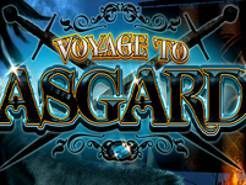 Play Now
Asgard was one of the famous Viking warrior kings and he was feared by many although it seems there was no need for this fear as he did have a gentle side to him. In this game players will meet many of his fellow warriors and will feel the depth of his strength and power in the dark and foreboding reels that bear his name. There are five reels and fifty paylines to this game that includes free spins, wild wins and a special bonus power wheel game. Players may try out the game for fun before placing real money bets and when ready may choose the coin size that best suits their needs. There is also an auto play feature for players that want to preset the number of spins the game runs for consecutively.

In this game the warrior symbol is wild and he can substitute for all symbols apart from the scatter and the bonus wheel power symbol. The wild on his own also offers very generous payouts giving players 1500 coins when five appear on an active payline. Four award the player 400 coins, three 50 coins and two 5 coins. The scatter is a dark stone cross and this appears only on reels 2, 3 and 4. When it does appear on these reels together the player is awarded 10 free spins during which all winnings are doubled. Players may trigger more free spins giving players even more winning options.

Two of the wheel power symbols on reels 1 and 5 at the same time triggers the special wheel power feature. In this game the player is taken to spin the two layered wheel. The player can win credit prizes and re-spins in the first layer of up to 25x and with up to 4 re-spins and in the second layer the player can win free spins. Asgard may not be present in this game but his presence is very much felt and many players will be grateful for his presence!
Play Now

Where to Play Voyage to Asgard Slots