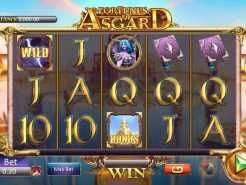 Play Now
Fortunes of Asgard is a step back in time to the Norse gods and their powerful tools that ruled that era. The hammer of Thor the god of thunder was considered one of the most important mythological symbols and together with the hammer there are many other symbols in the game that relate to Norse mythology. Players can try out this game for fun before placing real money bets and there is an auto play for players that like to preset the number of spins the game runs for consecutively.

Three of the scatter symbols in this game award the player free spins. The player wins 10,15 or 25 free spins that cannot be triggered again depending on how many of the scatter symbols appear on the screen. Three and more of the bonus symbols trigger the galaxy bonus game in which the player is invited to pick different symbols that will reveal cash prizes for him. In addition to these two bonus games there are two more features in this mythical slots game. If the player lands a Thor symbol next to a hammer, the reel with Thor on it will turn wild for one spin. If the player lands Helia next to a book, she becomes wild and stays in place for the next spin.

After each winning spin the player has an option of gambling his winnings by trying to guess the suit of a card whether it will be a red or black suit. An incorrect guess will lose the winnings for that spin but a correct guess can double the winnings. Trying out this game for fun before placing real money bets is a good idea for players that are not sure of the workings of the game.
Play Now

Where to Play Fortunes of Asgard Slots