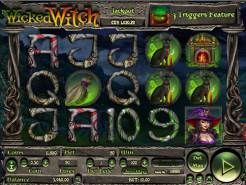 Play Now
There is always fun to be had when thinking about Halloween and even more fun when choosing one of the Halloween themed slots games such as the colorful Wicked Witch Slots. This game has five reels and twenty paylines in addition to a random progressive jackpot that can be won at any time when playing the real money version of the game. The more bets that are placed, the greater the jackpot grows and the more chances the player has of winning. The jackpot can only be won when placing real money bets but there is a chance to enjoy the game for fun before placing real money bets using a choice of coin sizes ranging from $0.01 up $25 per coin size.

In this game the wicked but charming witch is the wild symbol and she appears on each of the reels where she can substitute for other symbols and in this way help to complete winning payouts. On her own the witch awards players some huge payouts of up to 10000 coins when five appear on an active payline. Four award the player 3000 coins, three award the player 500 coins and two award the player 10 coins. The scatter symbols is the bubbling cauldron that is filled with green gunk. This awards players multiplying payouts of up to 500x the coin bet placed with five appearing on the screen. Three and more of the cauldrons triggers the free spins feature game. Players are initially awarded 6 free spins during which the appearance of the eyeball, frog, poison or mushroom will trigger a further 6 free spins and an extra bonus opportunity as the symbol dissolves to make room for a new symbol. Players can re-trigger the free spins game up to four times. At any time during the free spins or the base game, the random progressive jackpot can also be won, giving the player even more bonuses and fun rewards to look forward to.
Play Now

Where to Play Wicked Witch Slots