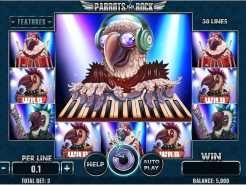 Play Now
Parrots Rock slots is a music lovers dream game with rock music playing as every reel spins. There are five reels and thirty paylines in this rocking game with reels 1 and 5 only having three positions and all the other reels having five positions.As with all good slots game, Parrots Rock can be played in fun mode before the player places real money bets on each line or just one or two of the lines. Players can place up to $300 in real money bets with this game that is filled with rocking parrots. There is the drummer, the singer, the guitarist and the singer in addition to their golden record, headphones and a microphone. An auto play option is also offered for players that like to preset the number of spins the game runs for consecutively and this can be stopped at any point and the player switches to manually hitting the spin button.

The wilds appear on reels 1 and 5 only where they can appear together or separately but when they appear, they are stacked on the reels. The game includes regular sized symbols and medium symbols that appear on reels 2, 3 and 4 only where they appear in configurations of 2x2 or 3x3. If five of the wilds appear on the screen, the player is treated to 150x the coin bet placed. During the base game a bonus symbol can appear at random on the screen and add extra bonus payouts for the player. Free spins are triggered if the free spin records symbol appears on reels 1 and 5 at the same time. The player is treated to 10 free spins. During the free spins a special prize box appears at the top of the screen giving the player an extra free spins or a multiplier. Parrots Rock slots is filled with great music that keeps your feet tapping as you watch the spinning reels and wait for the best wins possible.
Play Now

Where to Play Parrots Rock Slots