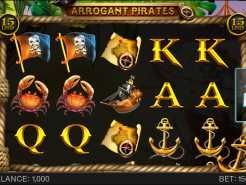 Play Now
They may be called arrogant but that does not mean they are not charming. The Arrogant Pirates slots game has five reels and fifteen paylines that are filled with images of the pirates, their loot and their tools. Players may try out the game in fun mode before placing real money bets and when ready to place real money bets, the player can place up to $150 per bet using a variety of coin sizes. There is also an auto play option for players that like to preset the number of spins the game runs for consecutively which can be stopped at any point and the player manually hits the spin button.

There are three different wild symbols in the Arrogant Pirates slots game, each one is a bomb with a different multiplier. When the bomb appears on the screen it can take the place of other symbols and in this way complete a winning payline. The multiplies attached to the bombs are 2x,5x and 10x. The pirate is the scatter symbol and he awards players 3x the coin bet placed when three and more appear on the screen in addition to giving the player 10 free spins. An additional bonus game is triggered when three or more of the bonus symbols appear on screen. The bonus symbol is a treasure chest and with three and more appearing on the screen, the player wins a chance to pick a treasure chest that will award him with a bonus payout. Arrogant Pirates have a charm and this charm oozes through the slots game that gives players plenty of entertainment and of course chances to win.
Play Now

Where to Play Arrogant Pirates Slots