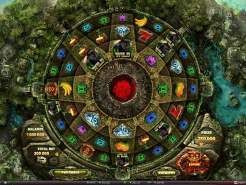 Play Now
Wildcasino is a game of intense heat generated by the incredible volcano that is the central feature of the game. Players may not have come across a game like this one before, it is rather unique. On paper the game is described as having three reels and eight paylines but once a player sees the game he will understand that all the reels are circular and of the eight paylines, there are two vertical paylines, two horizontal paylines and four diagonal paylines. The heat of the volcano burns symbols on every spin and these are replaced by further symbols that may or may not make up more paylines. This game can be tried out for fun before placing real money bets and the player may enjoy using the auto play that allows him to preset the number of spins the game runs for consecutively.

There are five different systems that can move into place awarding bonus payouts to the player. The earthquake occurs when there has not been a win from the initial spin and this shakes up the volcano and rotates up to three reels giving the player a further chance to win. The magma sees lava burning that will burn through symbols making way for new symbols. The sacrifice sees symbols being sacrificed and in their place new symbols appear. The pyroclast sees the pyroclast shooting across the screen turning random symbols wilds and the bonus symbol is the trigger for free spins when three and more appear on the screen. During the free spins the wilds appear stationary on the middle reel. There is also a wild symbol noted by the sleek black panther that substitutes for other symbols and awards players high payouts, as much as 2000 coins are awarded for five of the panther symbols appearing. Once the player has become used to the concept of round reels he will be able to settle and enjoy himself in this game of heated wonders that makes up one of the many wonders of the world.
Play Now

Where to Play Wildcano Slots