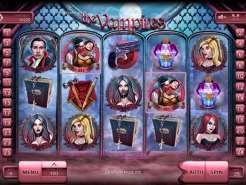 Play Now
Vampires are unusual creatures. They appear normal in every way and can also be very attractive as proven in this Vampire slots game. But they are deadly, vampires do not need regular food and drink, their sustenance comes only from blood and it must be blood of humans. Beware of the vampires, they can attack when you least expect it and take a sip or all your blood in one go. This five reel twenty-five payline slots game gives players a little of an insight into the lives of four vampires. There are three women and one men and all of them seem very pleasant to look at and one would not expect them to be so blood sucking.

In this game players can win wild wins, free spins and a bonus pick game in addition to winning scattered wins that multiply the payouts for the player. Set on a dark background, this game does have a sinister look to it, but players will be motivated by the bright wild symbol that has spread its wings. This wild can substitute for any of the other symbols on screen and in this way, it completes a winning payout. On its own the wild offers some generous payouts with five of them awarding the player 7500 coins, four award the player 2000 coins, three award the player 200 coins and two award the player 5 coins.

Pick and Win Bonus Game with Optional Risk After Every Win

There is an extra bonus symbol denoted by the goblet filled with wine. Three and more of these on screen triggers the bonus pick game for the player where he is invited to pick a goblet that will reveal an immediate bonus cash prize for the player. At the end of every winning spin the player has the option of choosing the risk game. The risk game gives the player a chance to try and double his winnings by choosing a card from a choice of four. If the players card is higher than that of the dealers that is shown, the player doubles his winnings. In this way, the player can try and double his winnings up to 10x, but it is a risk, hence the name of the game, because if the player loses, the loses his winnings for that spin. This may be a dark and sinister game, but it has some light in it with the many winning options offered.
Play Now

Where to Play The Vampires Slots