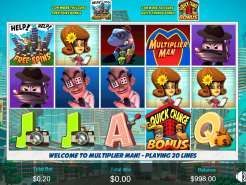 Play Now
Multiplier Man is a genius and he is hard to identify in real life as he lives as Ken Cash the undercover journalist. Copying every super hero from the comic books of the 1950's this colorful slots game looks just like a page from the comic books. Players are able to try out the five reel twenty payline game for fun before placing real money bets. There are a number of excellent features in the game and the highest bet possible is $200 per spin with lots of lower options offered according to the coin size that the player chooses. The coin sizes range from $0.01 up to $5. There is an auto play option for players that want to preset the number of spins that the game runs for and at any time the player can stop the auto play and revert to manually hitting the spin button for each bet.

Symbols in this comic driven game include Ken Cash, a reported a dog, the logo, the bad guys, a good girl and high scoring letters and numbers of cards. Ken Cash is sort of the wild symbol and when appearing in an active role he transforms to Multiplier Man and starts awarding some fabulous bonus options. With Ken Cash on reels 2 and 4,Multiplier Man expands to cover each reel and as a result offers the player some really good payouts. On his own Ken Kash who becomes the Multiplier Man awards players up to 750 coins when five appear on an active payline.

There are two scatter bonus games. Three and more of the free spins scatters rewards the player with up to 20 free spins. 20 are awarded when five appear on an active payline, 10 when four appear and 5 free spins when three appear. During the free spins any wild appearing expands to cover the whole reel. Three and more of the double x-ray symbol will trigger the bonus game. The x-ray will point at one of three locked vaults and it will reveal a bonus multiplier of up to 12x for the bonus payout. The quick change bonus game will take players to a new screen where they are presented with 12 cards, one is face up and the player needs to choose a card that is higher than the face up card. This game continues for three levels of consecutive wins and can award the player up to 150x the coin bet placed. It really is all about the multiplier in this colorful comics based slots game.
Play Now

Where to Play Multiplier Man Slots