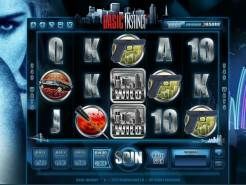 Play Now
It is impossible to not remember the famous scene from the 1992 movie Basic Instinct which maybe should not be mentioned in detail here. This slots game is based on the original movie and even has symbols that represent some of the characters and items that were used in the movie. Players will also not a progressive jackpot that is won when landing one of the bonus games. There are five reels and 243 ways to win in this game that heats up as the player enjoys more and more scenes from the game. The betting range offered in this game is $0.01 up to $1 per spin and players can choose the auto play function that lets them preset the number of spins they want the game to run for consecutively.

This game does not have any scatter symbols but there are four different wilds. Each wild offers the player a different bonus option that contributes to the overall winnings of the player. The regular wild is the city scape scene and it only appears in free spins where it can substitute for other symbols. The wild drop is stacked when appearing on reels 1, 3 and 5. When appear on reel 3 as a stacked symbol it drops out of the way and makes room for a new symbol. The free spins wild appears only on reel 3 and when it does appear the player is rewarded with free spins. The bonus wild symbol also appears only on reel 3 and when this occurs the player is taken to a new screen where he is invited to choose one out of twelve mystery boxes that reveal different prizes. If the player uncovers the gun at this stage then he wins the progressive jackpot. The progressive jackpot is a running jackpot that increases in value with every real money bet that is placed. This game might be an obsession for some but it is not nearly as steamy as the movie that gave its name. Having said that, Basic Instinct slots is just as enjoyable and offers a much more potential rewarding payout than the movie.
Play Now

Where to Play Basic Instinct Slots