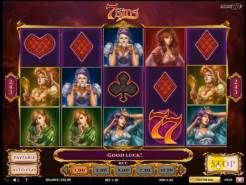 Play Now
The 7 Deadly Sins of greed, lust, wrath, gluttony, envy, sloth and vanity are all present in this poignant slot game where players can win free spins and benefit from one wild that offers a double feature. The game is set on a background of dark and sinister thoughts and really does make you think about your sins. Players may try out this game before placing real money bets and they can also set the auto play feature if they want to preset the number of spins the game runs for.

The Wild with a Double

In this game that has five reels and 243 ways to win, i.e. no set paylines, players will enjoy seeing the 7 on screen. This is the wild symbol that can substitute for others and complete winning paylines. There is also a double seven symbol that when appearing doubles, the payouts for the players wild wins. With seven of the 7 symbols on screen including doubles the player benefits from the highest payout in the base game.

Free Spins and a Chance for More

Three and more of the scatter golden chests on screen awards the player 7 free spins. During the free spins only one of the seven symbols appears as the symbol on screen and this symbol is also expanded on reel 3 when it appears. With only two of the scatters on the screen the player is given a second chance to try and win the free spins. This gives him a chance to choose one of the seven sins that may reveal another scatter rewarding the player with extra free spins. The 7 deadly sins are not so deadly in this 7 Sins game where they actually help the player and reward him with some generous payouts.
Play Now

Where to Play 7 Sins Slots