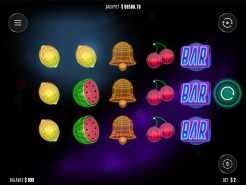 Play Now
Sometimes the old is also the best and this is definitely the case with the Classic 777 slots game that has five reels and ten paylines. Symbols have a certain amount of familiarity to them as players will notice the 3D images of slot fruits, sevens, bars and bells, but that is where the familiarity ends. This game is modern and fun and also very rewarding. Players may try out the game for fun before placing real money bets which is a very good idea for players who are not familiar with the slots games. When ready to play the real money version, players can place bets starting as low as $2 and reaching as high as $100 per spin.

There is a special icon in this game represented by the question mark and when it appears on the screen it can morph virtually into any one of the other symbols and be used to complete a winning layout and hence help the player. When three of these appear together on the screen the player is taken to the bonus game. The bonus game is even more exciting. This takes players to a new screen where they will see lots of 7 symbols in different colors. Lining up three of the same color 7 will award the player with a huge multiplying payout. The player can win anything from 1x up to 250x the coin bet placed in this bonus game. And there is more, the super bonus or jackpot that increases with every bet placed is won when the player lands three of the gold 7 symbols during the bonus game. Playing this slots games is exciting and incredibly rewarding reminding players of the development that has happened over the years with slots and of course that sometimes classic is always the best!
Play Now

Where to Play 777 Deluxe Slots