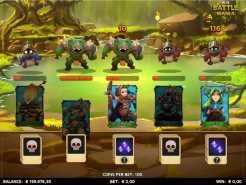 Play Now
Battle Mania is a new style game that is not a slots game or a card game but as a player there are still winnings to be earned. This game is classified as an RPG, this stands for role playing gaming. The player takes on the persona of one of the characters in the game and works his way through different scenarios and battles earning large and generous payouts along the way. At each level the player unlocks different themes and earns bonus payouts as he searches and tries to capture the heroes that threaten the existence of the heroes and their precious islands.

The player starts by selecting one out of fifteen from the fighting team with each member having a different skill that can be used in‏ the adventures along the way. There are five different bonus features that can be activated on five different islands along the route of the chosen hero. The bonus features include the boss fight where the hero has to defeat the dragon, the villains’ wave where he has 15 arrows and needs to use them wisely to eliminate the enemy. The free battles allow the player to fight along the way and earn cash prizes for each treasure chest he unlocks, and the lava stone pick bonus gives the player a choice out of 12 different stones that reveal different bonus amounts. Every 12 hours a special event is activated that lasts for 20 games only and gives the player 25% more value to his winnings of up to 1000x. When starting a game of Battle Mania for the first time, the player should start at the beginner level and when he is comfortable enough, he can move to the experienced level followed by the top expert level for returning players. Battle Mania is a new style casino game that allows the player to enter a different world online in which the decisions he makes and the battles he fights directly affect the outcome of his game and the money that he can earn.
Play Now