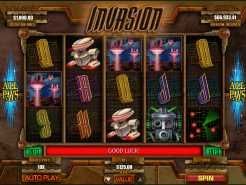 Play Now
The aliens are coming, and it is up to the invasion slots game to stop them or at least halt their progress. This colorful game that is also out of this world is made up of five reels and twenty five paylines. Players may try out the game in fun mode before placing real money bets and as the game proceeds in the real money mode, the player will also note the random progressive jackpot growing. The jackpot grows with every real money bet that is placed and it can be won at any time. There is an auto play option for players that like to preset the number of spins the game runs for consecutively and this can be stopped at any time and the player can continue manually hitting the spin button.

The Aliens Have Invaded

Three and more of the scatter symbols triggers the Alien invasion bonus game. Players are taken to a new screen where they are invited to pick from fifteen different alien ships. Each ship reveals a different prize. The player can either win a cash prize that is held inside the ship, or he can win collect which will give him a prize and end the game he is playing, or he wins the collect all. The collect all gives the player all the winnings held in the different alien ships and the player can proceed to the next level to continue playing the bonus game. There is also a wild that appears on reels 2, 3 and 4 where it can substitute for other symbols in the game and complete winning payouts. This is in addition to the random progressive jackpot that is won at any time when playing the real money version of the game.
Play Now

Where to Play Invasion Slots