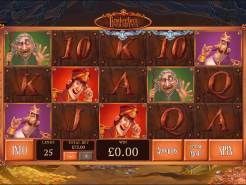 Play Now
Set in what looks like a neighborhood where Oliver Twist would live these five reels twenty-five payline slots game is filled with iconic old symbols including the lady of the manor and her gentleman and all the different servants that are at her beck and call. But the real stars of this slots game are the dogs that roam the streets and help players to find the tinderboxes filled with prizes. Players may try out this game for fun before placing real money bets and this gives players a chance to try out the game before he invests his own real money in the game. There is also an auto play feature for players that like to preset the number of spins the game runs for consecutively, at any time the player can stop the auto play and continue with manually hitting the spin button.

In this game there are three wilds, each one a different colored dog. The bronze dog when appearing on the screen will trigger a re-spin for the player and if a silver dog appears the player earns a second re-spin with an increased multiplier of 2x and if the player is lucky enough he can trigger a further re-spin that will award him the gold dog with a 3x multiplier. The scatter symbol appears on reels 2, 3 and 4 only. When it appears together on these reels it rewards the player with 10 free spins. If during the free spins the player manages to land a tinderbox then he is taken to an extra bonus screen where he is invited to choose a door on the screen out of a choice of three. His choice will either reveal a stacked scatter symbol, five extra free spins or a wild with a multiplier of up to 5x. This cute slot game is a mixture of fairytales and reality set in a town where poverty is rife but luckily the player can overcome this poverty and earn some handsome winnings.
Play Now

Where to Play Tinderbox Treasures Slots