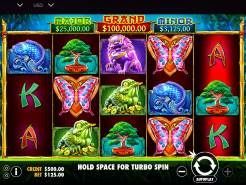 Play Now
The Pandas are gorgeous creatures, they are warm and cuddly and they are cute to look at. The panda must be the most popular animal in the zoo and in China it is also one of the luckiest animals. Players will note in this game that pandas are revered animals. They are looked upon in high regard and treated with real respect. For some they are considered to be the lucky charm. In this slots game that has five reels and twenty five paylines there are other lucky charms that the Chinese look to including statues of dragons and frogs in addition to birds and bonsai trees. Players can try out this game for fun and learn all about the three different jackpots that are set according to the overall bet made by the player. In a regular game the player can win anyone of the three jackpots up to 25 times.

The Chinese Feel of the Game

Players will enjoy seeing all of the symbols in this game that have a distinct Chinese feel to them. Whether it is the bamboo chewing panda or the letters and numbers that are decorated in ancient Chinese colors. The panda is in fact the wild symbol and it appears on all of the reels but one. This wild substitutes for other symbols and in this way can complete winning paylines. The ying yang symbol is the scatters and this awards players free spins. The player can win 8,10 or 15 free spins when three and more of the scatters appear on screen. During the free spins an extra mystery stacked symbol can appear at random turning more symbols wild and adding more bonuses and winnings to the player.

Where to Play Panda's Fortune Slots