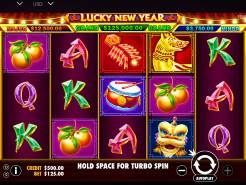 Play Now
The Chinese New Year comes around every year just about a month after the New Year celebrations of 31st December. Each Chinese New Year is celebrated with a different animal that is appointed for that year. This year is the Year of the Dog and to celebrate this clever and loving animal players are able to enjoy some Chinese culture with the five reel twenty five payline game Lucky New Year Slots. This game includes three special features in addition to three progressive jackpots that are won in part or in full during the special money re-spins round.

The Celebrations of New Year

As to be expected this game has a very Chinese feel to it with fireworks exploding in the background of red charm. The wild symbol is a dog caste in gold and this can substitute for any of the symbols on the screen apart from the scatter in order to help complete a winning payline. The scatter symbol is represented by the money tree of gold and this appears on reels 1,3 and 5 where it offers players 5 free spins when three appear on the screen together. During the free spins reels 2, 3 and 4 join together for the duration of the free spins with a very special Chinese dragon face on the screen. Any additional appearance of three or more scatters on the screen awards the player an extra three free spins that are added to the remaining spins.