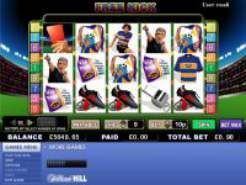 Play Now
Football Fever is everywhere and what better way to enjoy some football fun out of the fields than playing a slots game with football themes. This game has five reels and nine paylines. Players will see goalkeepers, fans, penalty cards, shirts, tickets and the football all spinning around the reels. There is also an auto play that allows the player to preset the number of spins the game runs for consecutively and at any point the player can revert to manually hitting the spin button each time.

The ball is wild but only appears on the middle reel where it can substitute for any of the symbols apart from the scatters. By substituting for other symbols, the wild helps complete winning payouts. There are two different scatter symbols. Both the red and yellow cards act as scatters and when three and more of either of these appear on the screen, the player is rewarded with penalty shot. Three and more of the red scatters award players with 8 penalty shots and three and more of the yellow cards award players with 5 penalty shots. The player is taken to a new screen with the goalie in front of him and he has to shoot in order to win goals. Goals lead to free spins and bonus payouts. This interactive slots game allows players to enjoy the World Cup season while not actually watching a game.
Play Now

Where to Play Free Kick Slots