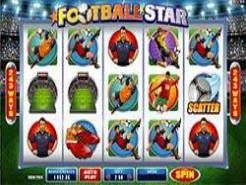 Play Now
It is football season and what better way to enjoy the delights of football also known as soccer that play a colorful slots game with the same theme. This game has five reels and offers 243 ways to win instead of set paylines. Players may try out this game in fun mode before placing real money bets of up to $50 per spin. There is a special rolling reels feature in addition to free spins that can be won and large scatter payouts.

The logo of the game is the wild symbol and it appears stacked on reels 2,3, and 4 where it can substitute for other symbols and in this way complete winning payouts. There is also a wild feature, the striking wild feature that appears anywhere on reels 2, 3 and 4 and it can randomly appear turning other symbols wild and giving the player a guaranteed win. The ball in movement is the scatter symbol and this is the key to the bonus free spins games. Three and more of the scatters award players up to 25 free spins during which the rolling reels feature is activated awarding players up to 10x the coin bet placed when winnings occur. The scatter is also a high paying symbol giving players multiplying payouts when five appear on an active payline the player wins 250x the coin bet placed, four awards the player 50x the coin bet placed and three awards the player 5x the coin bet placed. This is a game of cheers and winning prospects for the player.
Play Now

Where to Play Football Star Slots