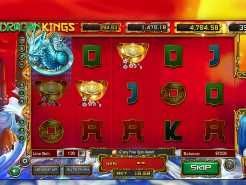 Play Now
In ancient China the dragons were considered like demigods, they were looked up to and revered for their powers. This five reel ten payline slots game is a tribute to the power of the dragons and all that they gave to the people of China. Players may try out this game in the fun format before placing real money bets of up to $10 per spin. There are four special jackpots in this game too that increase with every real money bet that is placed and players will learn how they can try and win one of these later on.

The dragon king is the wild symbol appearing on the middle reel of the game where he expands to cover the whole area of the reel and if it is used to substitute and make up a winning payline, the winnings for that line are doubled. Each of the dragons offer different bonus payouts when appearing on their specific reels. The azure dragon on reel 1, awards the layer 1 free spin. The black dragon appearing on reel 2 awards players multiplying payouts of 3x the winning payout. The white dragon on reel 4 expands left or right awards players further payouts and the red dragon on reel 5 awards the player up to 400x the coin bet placed for that spin. In addition the dragon pearl acts as a scatter and three or more of these appearing reward the player with free spins. Three of the dragon pearls award the player 6 free spins, four award the player 10 free spins and five award the player 15 free spins. If a dragon pearl also appears on the special 6th reel the number of free spins awarded is doubled and the player may also be eligible to win one of the bonus jackpots if the dragon pearl on reel 6 appears with one of the other dragons on different reels. The player may be lucky enough to win the bronze, silver, gold or diamond jackpots. Centered around the Chinese culture this game is filled with good will and charms giving players an incredible experience and plenty of chances to win some great payouts.
Play Now

Where to Play Dragon Kings Slots